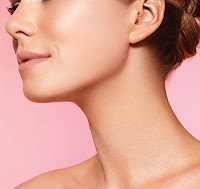 The Neck. What an amazing creation! It's awesome! I was jumping up and down with excitement when I saw a programme called "Inside Nature's Giants - the Giraffe" a year or so ago. I love giraffe and I love necks so it was an unbeatable combination! So, why...?

Let's explain it - in very simplistic terms - using the beautiful giraffe with its truly wonderful body....

Do you reckon that, when a giraffe reaches water and wants to drink, it just drops its head down between its splayed front legs and slurps up the water? And then lefts its head up again and holds it there as it moves around? Yes?
Ah no, it's much more exciting than that... 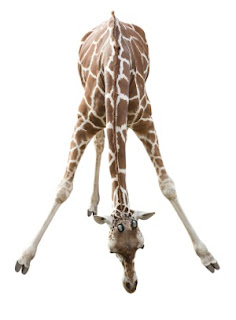 Sadly I find that the programme is not available on You Tube any more due to copyright laws, but what it showed was, running right down the back of the giraffe's neck and back, from the back of their head right into their back, is a massive 4-8 inches in diameter ligament - yellowy stretchy strong elastic fibre, of the type that has to have huge effort exerted upon it in order to stretch it at all. So when the giraffe has its head down to drink, it is having to actually PULL its head to the water - using lots of muscles to pull really hard against the elastic at the back of its neck. This elastic is so strong because it is designed to maintain the 25lb head in balance right on top for the majority of the time in a giraffe's life. Then the giraffe shortens the muscles all down the front of its neck to get its head down all that way to drink. When it's had enough, it simply lets go of the pull-down at the front and its head flies up all on its own; the elastic ligament at the back doing it all by elastic rebound.

This rebound is also the 'ping' that brings the giraffe's legs back under them from the splayed position they have to adopt to drink - the head goes back up and the legs simply follow. You might think they push themselves up with their legs, but can you imagine the effort it would take, and see how they would actually push themselves into the ground and not up? Take a look at this one minute YouTube clip to see what I mean - it's ever so cute too!  http://www.youtube.com/watch?v=INNWrYgYQ4w

On the TV programme, the vets were using naturally deceased animals, and dissecting them to learn about how we can best understand how they work, what they need, and how we can support them. When they reached the cervical (neck) spine of the giraffe, they found the huge length of 'elastic' I mention above and, even in a deceased animal lying on its side, it took four vets to pull the head around into the 'drinking shape'. Then the call went up to 'stand clear' because, as they let go, the giraffe's head shot round in a rebound that would have knocked anyone standing in the way right out!

So, think about this - it means the giraffe doesn't have to 'hold its head up' all its life; its head is maintained a-top its body by the inter-play between this massive ligament and the muscles of the body. So, unless it's actively doing something like drinking, the giraffe can just get on with moseying around doing what giraffe do. When they graze for food way above their heads, this ligament will also assist them to let their head go up there without effort - the giraffe just lets go even more of the front muscles of itself, and up goes their head with the pull of the elastic tendon at the back. Magic!

So, what's the point of my excitement which I so wanted to share? Well, guess what? We are made the same way. We too are vertebrates, we have a head attached to a spine and, in extremely simplistic terms, we have the same elastic at the back of the spine supporting our head. Note the supporting - we don't actually have to hold our head up, our body has got the same, extremely efficient method as the giraffe's. Our neck is just somewhat shorter - but not as short as we often make it!

So, as you move around today, imagine your wonderful long stretchy pieces of elastic running the length of the back of your spine and how, as long as you don't pull down/slump in the front of your body, this ligament, with its associated muscles, can carry out, unimpeded, the support of your head as you move around doing what you do -  just as the giraffe's head is supported. Now we can have both the giraffe and the human moseying around doing what we do in a poised and balanced fashion!

After all, walking around town with your head pulled down as if you're about to hoover something up off the ground with your mouth is so not a good look, is it? So don't even pull down one inch!
Enjoy the grace of both the beautiful giraffe and you!

PS A giraffe's cervical vertebra are up to 11" in length and ours barely 1"... If they can have free necks, then we certainly can!

(* The DVD of Inside Nature's Giants is available from here http://www.amazon.co.uk/Inside-Natures-Giants-Mark-Evans/dp/B004NXDI4A )
Posted by Annie at 14:10 2 comments: